Stopped Dead in My Tracks

It is not a cliché to say that they don’t make things like they used to. During my 36 years as a quadriplegic, I have used a power wheelchair made by the company Invacare (with one small break using a Quickie power chair but that is an entirely different drama). I have always been pleased with this brand of chair. I am very active, so my chair is my lifeline and takes a beating. Even so, my experience is that it lasts at least 10 years. And any power chair user will tell you that changing to a new chair is a nightmare. Besides all of the insurance paperwork, it is difficult

If it were a car, my “new” (approximately two-years old) wheelchair would be considered a lemon. Parts began to break almost as soon as I started using it. And finding a ` is analogous to a vehicle, you are mistaken. A wheelchair user is not automatically eligible for a comparable rental (or even the ability to borrow a vehicle) and it is dangerous for your skin and body to use a chair that is not designed for your body. As a result, there is never a “convenient time” to have a chair breakdown. And usually it occurs at the worst possible moment. That’s what happened to me.

A close friend from California that I had not seen in two years was in town and we had made three days of plans. On Sunday, a very rainy day, we had a late breakfast, did a little shopping and were going back to her hotel room (it was a furnished apartment in a hotel) to get ready for dinner with friends. I was in the doorway of the hotel and my chair died. No power. Completely stuck. The chair had been showing signs of some sort of power failure for a couple of weeks and we managed to get it going by moving the batteries around and lifting them in and out. This is no easy task because there are two batteries that weigh over 100 pounds each, so I can attest that my caregivers were hurting their shoulders and back as they moved the batteries back and forth into place (while I silently cursed using every word in the book).

I was convinced that it was the batteries acting up, so a very nice guy at the hotel helped to move the batteries to try to get me back in power-land. No such luck. We took my chair out of gear so it could be moved manually, and he pushed it to my friend’s room. We quickly rearranged dinner plans and all met at the hotel room for pizza, drinks, and dessert. I enjoyed myself, but in the back of my mind was dreading the upcoming week of chair drama and worrying if it would be fixed in time for a major event that I had to attend later in the week. Although only four blocks, getting home was not easy. A student friend pushed me all the way to my house.

First thing on Monday morning, I called my durable medical equipment (DME) provider where I purchased the powerchair and was told that nobody was available that day to help me. I was furious. Not having a working wheelchair is like being chained to a pole. I couldn’t tilt or recline and my body was hurting. 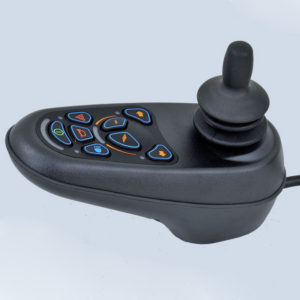 I decided to call another provider that I had used about 15 years ago. They said that I could come in right away. I went to the DME provider, they lifted me out of the chair and went to work on it.
The technicians determined that it was an electronics issue with the joystick (I wasn’t feeling much joy) and that they needed to order a new one. Going through insurance would take three months. I had no choice but to have them order it overnight mail and pay out-of-pocket. Because it was late afternoon, I couldn’t get the new joystick until Wednesday.

That totally ruined my plans for the evening. I was supposed to go with my two girlfriends to Zumba class and then dinner afterwards. Once again, we made a quick change of plans and they pushed my chair downstairs to a Russian restaurant. We did enjoy the dinner (as I was able to keep the chair drama pushed toward the back of my mind). Plans for the next day that included massages and shopping were canceled because pushing my chair with the batteries taken out was still difficult. Instead, my friend and I had time to sit and chat and eventually open a bottle of wine! By the time the day was over my body was hurting from head to toe. 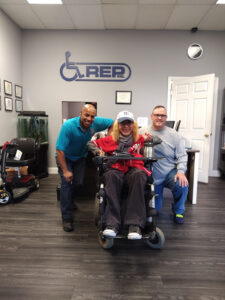 On Wednesday morning, I called the provider and they said the joystick would arrive at approximately 3 PM. With the new joystick installed, I was on the move again! I still have body aches from the 3 -day drama of not being able to move in my chair, but I truly appreciate regaining my independence.

The guys that fixed my chair were fabulous! I sent them pizzaon Thursday for lunch to thank them for their efforts. Maybe there is customer service in the DME industry? I’ll have to see if things work out the next time my “lemon” breaks down. I am cautiously optimistic.