This lockdown has canceled so many events for so many individuals. Now that Halloween is approaching (or here, or just passed, depending on when you are reading this),

I have been thinking more about what I am wearing each day. Those two sentences don’t seem to go together, but for me one of the major types of cancellations has been Comic-Cons which usually involve a lot of cosplay or dressing up as a character from movies, comics, anime, video games, or pretty much anything else. There is a difference between Halloween and Comic-Cons to be sure, but they both can involve wearing special costumes.

I, personally, do not do cosplay when I attend Comic-Cons, but that is mainly because I don’t want to spend all the time and effort getting ready and then being stuck in a likely inaccessible and uncomfortable outfit all day in an unfamiliar locale. But I have thought about what it would mean to me if I did: cosplay would be an escape from reality, if only for a day or a weekend.

I feel that just the act of making myself into another person allows me to stop worrying about every little thing and just have fun in someone else’s shell; a liberation of sorts. Of course, it doesn’t make everything go away; putting on a bald-cap and a nice blue suit to be Professor X doesn’t cure cancer, but it does make it take a backseat for a while.

It also places me in a bit of a dilemma; as someone who uses a wheelchair, do I want my wheelchair to be part of the costume or do I want it to just be an add-on? Would I go all out like this (on the left) cosplayer of Ghost 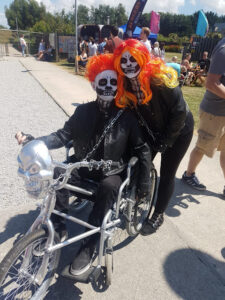 Rider (actually, to do that one, I’d need some serious additions to my wheelchair!) or would I just want to be Spiderman who is using a wheelchair after breaking his leg?

Yes, there are a few characters who do use a wheelchair that I could model after if I seriously wanted to dress up. The first three that come to mind are Professor X from the X-Men, Captain Pike from Star Trek (TOS), and Joe from Family Guy. There are probably some more I’m not familiar with (especially from anime), but characters who use wheelchairs are few and far between.

I’m not dressing up this year, although I might put on some of my special Vans sneakers and my Stan Lee T-Shirt even though my wife is the only one who will see me. We are leaving a bowl outside our condo for safe trick-or-treating. But I must say that writing this blog has given me a short escape from reality. I’m no longer someone sitting in a wheelchair trying to make ends meet; 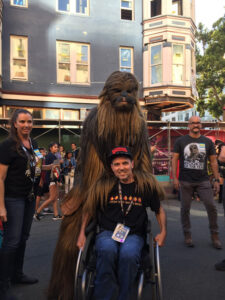 I’m just a person who is contemplating cosplay and thinking about Comic-Cons. And I realize there is nothing wrong with that. All of us have the opportunity and should take the time to relax and imagine what might not be reality but what could possibly be. It helps out every once in a while.