We recently took a trip up to Manhattan so Sheri could attend an Advisory Board Meeting (Rockefeller College of Public Affairs & Policy, University at Albany, SUNY) and attend a reception to meet with UAlbany students interested in attending law school. We decided that it would be fun to attend a show on Broadway while we were there, so we began researching 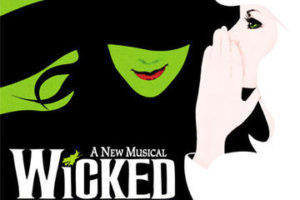 what shows would fit our schedule. The one that fit best was Wicked, so we called to see if we could get tickets about 3 weeks before the trip and fortunately they had seats for two people who use wheelchairs and one for our companion!

Because of the nature of my hearing loss as a result of my disability (Friedreich’s Ataxia), the expense of going to see a show on Broadway would only be justified if the production was captioned or, at least, not completely reliant on understanding a lot of dialogue. We did some research on captioned shows on Broadway and found a company called Sound Associates, Inc. (soundassociates.com) that provides a device called I-Caption®. 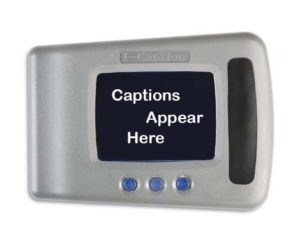 The device is a handheld screen where one can read the captions of the dialogue and the lyrics to the songs of the show. For Wicked, the text was accurate and it was almost perfectly timed with the spoken dialogue. There were a couple of issues I found that I will cover below, but simply put, I was incredibly pleased to find an outstanding captioning device that is offered for free for live shows on Broadway.

The process for reserving the device is quite easy. You call and leave a message for the type of device you need (other hearing devices are available). You state the name of the show, date and time and a callback number. You can also send in a request by email. We received a call back the same day confirming the availability of the device, where to pick it up and the process for using it. When we arrived at the show there was a gentleman exactly where we were told. He took my ID and we returned the device after the show.

As I said, the captions were just about perfect. I don’t know if they were being done live or if the device was pre-programmed with the correct captions, but the captions themselves as well as the timing of the dialogue was impeccable. The only difficulty I found with the captioning itself was that it could be difficult to tell who was saying something if there was a conversation going on between several people on the stage. This may not be an issue for individuals who are seated close enough to the stage to clearly see faces and who is speaking, but our seats were far from the stage (I’m not complaining; they were awesome seats; the only time our view was blocked was during the standing O at the end of the show!) and I couldn’t really tell who was speaking. There were only a few times during the show that that happened, but it probably would not have happened at all if the captions had identified the speaker (for example, Person A: This is my caption, Person B: And this is my caption.).

The second issue with the device was that it wasn’t the most comfortable to try to hold it up so that I could see both the captions and the action on stage. Because I was sitting in a wheelchair section and there was nobody behind me, it did not matter if I held the 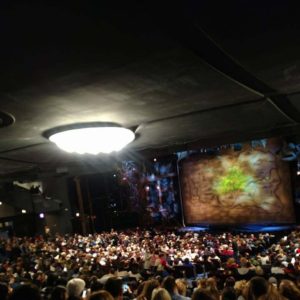 device at eye-level. Had there been other audience members behind me, holding the device up that high may have been distracting. Regardless, this could be rectified by having some type of stand for the device or a holder in the chair in front of me, similar to how it is done at the Opera.

We had a really good time at the show and I am able to check off “seeing a show on Broadway” from my bucket list. I have to admit though that I hesitated to write the previous sentence, because that makes it sound like we will never go back and I hope we do!