Growing up, my father was known for telling many stories. Those that knew him can attest to the fact that he would tell the stories over and over, but they were always accurate, and his memory was spot-on. Little did I know that I would inherit his gift (although sometimes 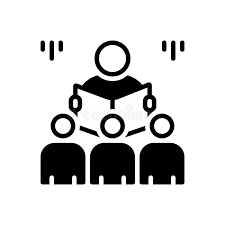 not viewed as such when you are hearing the story for the 5th time) and that there was actually a world of professional storytellers.

I always viewed telling stories as a way to connect others with your experience as it related to people, places, activities, and all kinds of things intertwined. It was natural, authentic, and in most cases, unrehearsed. And then, I discovered that there was an actual art of storytelling and I was about to become a part of it.

After leaving to leave my job as a lawyer for the Federal government, I began writing and also reading different things on the Internet that I would not have normally read. I was familiar with The Moth from hearing it once in a while on NPR, but didn’t know the details of how it worked or anything much about it. I did more research and found out that there was something called a StorySLAM and that DC was one of the cities that had these events. The Moth provided a theme, you prepared a story no longer than 10 minutes, and then attended the venue and put your name in a hat, taking the chance that you may or may not be chosen. You can also do an online pitch on any topic for no longer than two minutes. I tried that but I didn’t hear back. So, in February, 2018 I decided to make an appearance at the Moth StorySLAM at the Miracle Theater on Barracks Row in Washington DC. The theme was Etiquette and  had written what I thought was a fantastic story about how having a disability turns traditional etiquette upside down. Prior to intermission, there were five storytellers chosen and I wasn’t, but right after intermission, at number six, my name was called. I got up in front of the full crowd 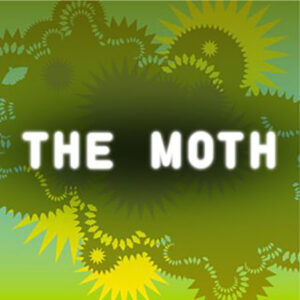 and told my story. There was laughter, but I was talking too fast. I had too much packed into my story and didn’t give the audience time to react before I was on to the next etiquette misadventure. Besides learning what to do better the next time, I figured out the process. Each storyteller was scored by three groups and a cumulative score for each storyteller. The winner was then eligible for a GrandSLAM. I left that evening with my one friend who accompanied me discussing how to do better the next time. I didn’t know when that would be.

I kept checking the website and saw that the theme for May was Falling. It was a great theme for me and this time I prepared with a shorter and tighter story and ample opportunity for audience reaction without going over my allotted time. Many of my friends had heard about the first StorySLAM and all rushed to buy tickets. I told them that there was no guarantee I would be chosen, but regardless they would have a great time. They would hear fantastic stories, and the MC, R. Eric Thomas, was hilarious and he, alone, was worth the price of admission. I even had cousins in town so I was hoping to be chosen. Once again, I was chosen at number 6. This time I was much improved. I felt comfortable and at ease. The story flowed and the audience had ample opportunity to react. I won the StorySLAM with an overall score of 9.3. I was off to the GrandSLAM. The GrandSLAM occurred the night before Thanksgiving in 2019 to a packed house at the Lincoln Theater. I went down prior to the show to work out the accessibility to the stage so that I was ready to go. The night of the performance was fabulous. The theater was packed to the gills with over 1,200 people and by then I had the tools in my toolbox needed to craft a good story that resonated appropriately and met the time requirements. The GrandSLAM wasn’t scored, but in my mind and hearing feedback from my friends, I felt like I hit it out of the park.

Similar to The Moth, but on the local level in the Maryland, Washington and Virginia area is a nonprofit called Story District. They have live storytelling the second Tuesday of every month, special events with a theme, and run storytelling bootcamp. This is the place to get your storytelling workout! The difference between The Moth and Story District is that with Story 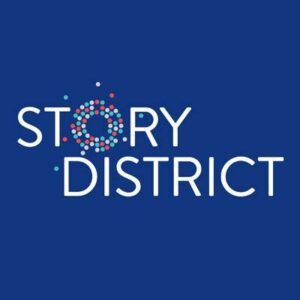 District you make a pitch over email and then in-person to get chosen for a show. If chosen, you know beforehand that you will be telling a story. Additionally, you get coaching by expert storytellers. I did a pitch in October 2018 and was chosen for one of their shows with the theme Primal Instinct. I told the story of being newly injured and my mother wait in line to purchase tickets to the Bruce Springsteen, Born in the USA Tour. All of the storytellers were great, and I had a fabulous time. I was hooked.

One of the biggest shows of the year for Story District is Sucker for Love. It is held each Valentine’s Day and it is a storytelling, but even more so a production. It is a very competitive process and then when/if you are chosen, it requires practice every other week. From beginning practices until dress rehearsal, the stories become tighter, you learn how to change different voice levels to show conversations, and how to balance the text to evoke different emotions throughout the story. I made a 400-word pitch online and was notified that I could try out in person. My tryout was two minutes without paper. I was then notified that I had been chosen for the show. The work began. And boy was it work!

The end result was worth every minute. I was honored to have so many friends and colleagues attend the event. And I got the added benefit of bonding with the other storytellers. Such wonderful people. The Lincoln Theater was packed and the rush was intoxicating. I didn’t want the night to end. 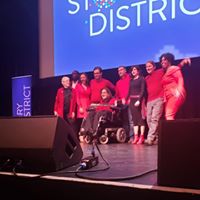 Many people have asked me how I found out about storytelling. My answer is that as I was starting a new chapter in my life, I began to explore other activities that would utilize my existing skill set in a different way. Storytelling was one of the activities that I discovered. I encourage friends to try storytelling or something else that they may come across that is new and completely out of their comfort zone.

I will definitely continue to do storytelling, but right now I’m devoting time to writing my own story in book format. I’m so glad that all of you will get a chance to hear my Sucker for Love story if you watch the video in the newsletter and on the Media page of happyonwheels.com. A big shout-out to Story District and The Moth!