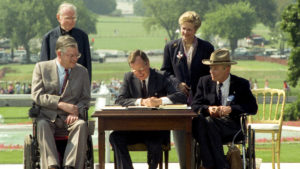 This past July 26 was the 29th anniversary of the Americans with Disabilities Act (ADA). A groundbreaking law, signed by President George W. Bush, surrounded by leaders of the disability movement. Those individuals present that day had fought tirelessly for the rights of the disability community. They had been involved in sit-ins at the US Department of Health Education and Welfare (the predecessor to the separated Department of Health and Human Services and Department of Education) and many had been dragged to jail. 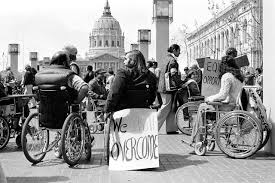 They had a vision of a better world for those with disabilities coming behind them. One where fighting for access to education, employment and places of public accommodation like restaurants and movie theaters would be accessible to all. That you could go in the front door and not the back door. That you could GET IN THE DOOR!

Many improvements occurred as a result of the ADA. Public awareness has increased. Access to transportation, housing, and public accommodations are far better than in 1990. But things are not where they should be. Developers

and architects still don’t understand or don’t comply with the ADA. Compliance with new laws for accessibility to keep pace with emerging technology are woefully inadequate. Travel by air is covered under a different law and remains beyond challenging. And basic compliance with the ADA requires constant vigilance. We can celebrate how far we have come but the fight must go on. As the famous Justin Dart would say, “Lead On.”