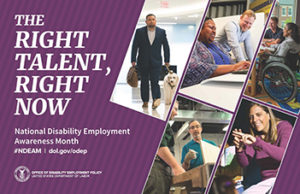 component of spinal cord injury (SCI) coexist. As an individual who has been a quadriplegic for 36 years, my experience reflects both.

Spinal cord injuries are more common than one would expect. There are approximately 173,000 new SCI cases each year and the majority (78 %) are male. The primary causes are vehicle accidents, acts of violence (mostly gunshot wounds), and other sports related activities such as diving. It is a life-changing event. While the month of September has been designated as a month to raise awareness about SCI and highlight individuals and their perseverance and success in achieving their goals despite their disability, it is important to keep awareness going throughout the year.

I was injured in 1983 in a diving accident. I had a cervical injury and am a quadriplegic. I had no awareness about SCI and had never met anyone with SCI. Living in a small rural town without curb cuts or stoplights (my soon-to-be husband could not believe it when he saw where I grew up!), being independent in any way was significantly compromised. I went to a rehabilitation center for eight months and when I returned home my parents had to convert the lower part of our house into a bedroom, renovate the bathroom to include a roll in 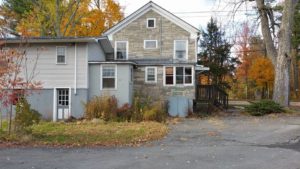 shower, and install a lift so I could get to the main level from the garage. I could no longer use my bedroom, up 16 stairs. In short, I felt like a prisoner.

I knew I wanted to leave. The relationship with my mother was broken as she cried all the time and my father had the burden of running his business while working with insurance to get me the equipment that I needed such as an accessible van, appropriate nursing care, and the like. One advantage of being in a small town is that my teachers tutored me throughout the summer so I could return to school for my senior year and graduate with my class. It was beyond difficult to return to a school that was unchanged, except for one wing that was made accessible, therefore my classes were all held there. My friends reacted in different ways and at age 16 you don’t have the wisdom and maturity to deal with life-changing events. Looking back, certain relationships could have been maintained, but awareness of what I was going through and what it meant to be a quadriplegic did not exist for me or for anyone else.

I had a very good vocational rehabilitation counselor assigned to me and he raised the issue of going to college. As scary as it was to leave home, I wanted to go. I lived in New York State and the possibilities open to me were fantastic. If I attended a State University, I was eligible for a full scholarship, a stipend for books, and money to pay for a certain number of hours of help. Additionally, it would give me the opportunity to get a degree that hopefully would lead to gainful employment. I might’ve sustained a severe physical injury, but my brain was fully intact.

The transition to college was filled with obstacles. Even before I got there I dealt with the isolation at orientation, where I did not meet anyone like me. Then came the dilemma of whether I should tell my roommates in advance that I was disabled. In those days you didn’t have the ability to look on Facebook or any social media. You got a piece of paper with a list of names and phone numbers. I decided not to say anything because I didn’t want them to form an image in their head before they met me. To my surprise, our initial meeting was friendly, and I lived with the same women throughout college. With the assistance of a fabulous head of Disabled Student Services, the University at Albany wound up being a great place for me. It was mostly accessible, the faculty provided reasonable accommodation when needed, and it was not 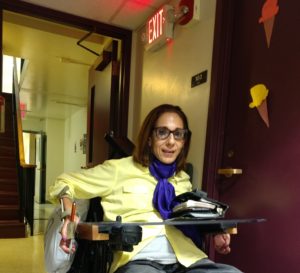 that far from home. I found a great wheelchair repair person (much needed because my tires had tubes and popped all the time because of thumbtacks from bulletin boards) and I was able to conquer the obstacle of taking notes in class.

But the experience was not without difficulty. I couldn’t attend the parties upstairs because there were no elevators. Often, I could not go out with my friends because accessible transportation was not available. Or, the place that everyone was gathering was not accessible. I went to college in the late 80s and the ADA did not exist. Again, there were times of isolation and loneliness. Despite all of this, I decided to apply to law school and having a sister as a lawyer gave me a mentor I could rely on. She lived in Arlington, Virginia, near Washington DC and it was a place that was designed in such a way that I could be independent because of mass transit, better weather, and a wide variety of job opportunities.

To my great surprise I was accepted at the Georgetown University Law Center. Again, I was presented with a housing dilemma because there was no accessible housing on the law school campus. I lived on the undergraduate campus in an accessible apartment and travelled back and forth to law school in a dilapidated van with a lift that had 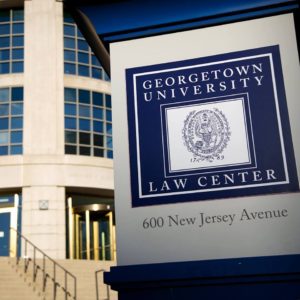 a steep and rickety ramp. I lived with two great nursing students, but I struggled with my hired nurses and couldn’t find a pool that I could rely on. At one point, I sustained a burn from the incompetence of one nurse that had me in bed for an entire semester of law school. Luckily the law school was willing to give me an extension and I was able to complete my coursework during the summer.

I also decided to go to law school at night. This decision was made because at that point individuals were not covered under their parent’s insurance until age 26. At 21, I was cut off. At that time, the Federal government was the only place where I could work and have health insurance despite my pre-existing condition. I liked policy work and knew I didn’t want to work in a law firm, so that helped me in my decision. I applied to over 100 government agencies and received a positive response from one. And from that job, I was able to move to different agencies throughout the government and have a very successful 25-year legal career. I retired and now run a business, Happy on Wheels with my husband of 14-plus years.

And this is where SCI and disability employment awareness converge. Understanding the challenges of those who have SCI and have succeeded is a roadmap to fundamentally shift the paradigm. If more people understand the impact of SCI and are not afraid of employing an individual with a significant disability, the employment statistics will go up. Attitudinal barriers can be broken down starting at the lowest levels, even in kindergarten. This is something that we educate students on as part of our business. The fear factor can displace efforts for an employer to hire an individual with SCI. This is necessary because of the external barriers that have been broken down through advances in technology and other societal developments that make it easier to get support throughout school, transition to college, and ultimately a successful career.

We should celebrate and highlight those with SCI who have succeeded and moved forward in a positive way despite this massive change in their life. But barriers still exist. As a community, let’s work toward increasing the level of education and ultimate employment of those with SCI. At a time when diversity and inclusion is in the forefront of our national policy debate, we have an opportunity ensure that disability 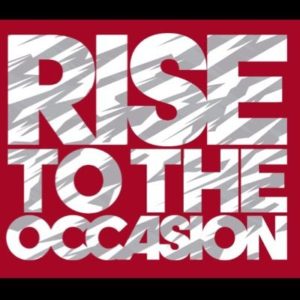 is front and center. Too many individuals are left behind. Do your part in helping someone with SCI, or any other disability, learn about the supports available and how important it is to be an advocate. We can be the generation of change. Let’s rise to the occasion. 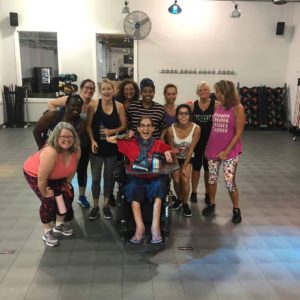 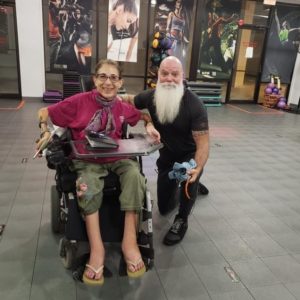