Back in July I went to Comic-Con out in San Diego (I posted some pictures in the last newsletter) and I was a bit surprised at how I was treated there by the other attendees. I had no bad experiences with anyone there! Granted, because so many people attended

(an employee said there were about 150,000 people each day, and it was four and a half days long), maybe I just lucked out. But I don’t think so.

Now, please, don’t misunderstand me. When I go out in public, I don’t have any expectations that I will be treated poorly, but sometimes where I live and many times when I’m in a place that I’ve never been before and individuals see me out in public using my wheelchair or scooter, there is always someone who rolls their eyes at me or thinks, “What a brave, brave soul to be out buying himself a new pair of socks!” A condescending remark or pat on the head like that was something I did not experience at all at Comic-Con.

Why was this? I thought about that a lot. First, let me just say that the people/employees who put on Comic-Con International in San Diego were top notch and I had no issues with them, but here I am focusing on the attendees. With that large number of attendees (mentioned earlier), I saw people of all colors, races, ages, and abilities. But I think there was one thing that most everybody there had in common: they had an either inner or outer nerd/geek history. 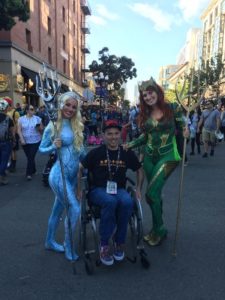 I believe it’s pretty common knowledge that nerds/geeks tend to have
a rough time growing up. Whether it’s because of a fondness for comics, action figures, anime, or Dungeons & Dragons (just to name a few), just about everyone who is called a nerd/geek has felt like an outsider sometime and therefore they tend to be more accepting of others who may feel like outsiders (because of their disabilities).

I don’t have any hardcore data to back up my thoughts, but sometimes real-life experience means more than hardcore data.