After being injured for 38 years and getting a new wheelchair at least six times, you would think that I would remember the horror. But my mind blocks it out. It is an exercise in patience, innovation, and a whole bunch of frustration. See, everything is all connected. You are probably wondering what that means. I’ll explain. 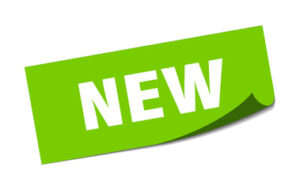 You start by getting measured for any wheelchair. Getting the intake scheduled for this is not difficult, but usually the slots are hard to get. When you call, you are likely going to get an appointment 2-3 months later. At the appointment, a physical therapist and a wheelchair vendor meet with you to determine the best chair available. This changes over time as technology improves. So, you can’t change to the exact same wheelchair. Additionally, over six years or so, your body changes. It is common to need more supports on your trunk, different types of leg rests, and other new controls and useful technology that are available.

Once you leave the intake, the physical therapist writes a justification of medical necessity to the insurance company. More waiting. After what is likely to be another couple of months, insurance will either approve or deny your chair and cushion. Luckily, I have not had insurance deny any of my wheelchairs. I think that is because I drive them into the ground knowing that changing to a new chair is an ordeal. That is sort of a tricky and dangerous thing to do because many times I have had my chair break down and not have parts to replace it, so I am forced to order a new chair.

The next part is the worst. You would think that it would be a great occasion to see and use your new chair. It’s quite the opposite. It is not like driving a new car out of the dealership. Your body is used to the chair you are in. It is easy to maneuver. It is like an old friend. As soon as you are transferred into the new chair, it seems like your body is not you. Personally, I find it to be incredibly difficult. The armrests need adjustments. The footrests need adjustment. The joystick driving control usually needs to be adapted so I can use it. And then I need to learn how to drive an entirely new chair.

It doesn’t stop there. My chair locks in place so I can sit in the passenger side of my van. But when you get a new chair, you need to replace the lockdown and put the bolt needed for it on the new chair and redo the lock in the van to safely fit because every chair is different. That entails hours at the van adaptation company. Long days of just sitting and waiting.

And then the next problem. It is always the case that a new chair does not fit with your current desk height because every chair is a different height. That means either figuring it out yourself or bringing in an ergonomic specialist to assist in coming up with a desk configuration that is useful and can be used independently.

By this time, frustration sets in. There is a time frame when I could not go anywhere in my van because it wasn’t yet adapted, couldn’t use my desk for my computer because it wasn’t finished, and my new chair seemed uncomfortable and strange to ride in. I wanted to tear my hair out. 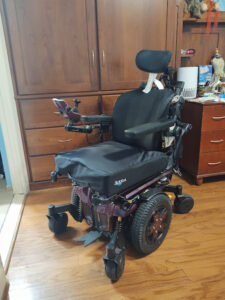 After about three months, I am finally making friends with my chair. I’m more comfortable driving it. My van lockdown works. And I can utilize the computer easily and do my work without being uncomfortable.

I hope I remember this long period of frustration when it is time to get my next chair. I’ll save this blog so I can read it. Once you start the process, brace yourself. You are in for one heck of a journey.

My wife Sheri lost her sister to liver cancer at the end of September. Sheri’s sister, named Debra, battled her disease for 2 years. Being married to Sheri for almost 17 years, 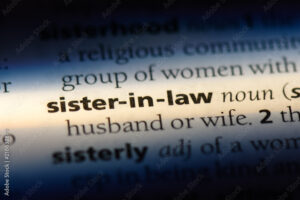 I got to know Debra quite well, and I do think I knew her better than many people know their sister-in-law. I’ll explain why.

Throughout our marriage, Sheri has had many serious hospitalizations. Most have been at least a week long, and at one point, she was in the hospital in Georgia for over 6 months. In Georgia, Sheri was a patient at the Shepherd Center and/or the nearby Piedmont Hospital. The Shepherd Center, one of the premier rehabilitation centers in the U.S. for spinal cord injuries, provided apartments to family so they could be near the patient and have easy access back and forth to the hospital. Sheri was at Shepherd for some not-so-drastic surgery, but she had major complications following the surgery and ended up in the ICU (Intensive Care Unit). Both Debra and I were at her bedside right away and Debra and I spent many hours together and were “roommates” in Georgia. That gave us time to talk, even though it was under difficult circumstances. You find that when you are with someone else during difficult times, it gives you the opportunity to forge a very special bond. And that’s how I felt about Debra.

I wasn’t only with Debra during the bad times. She lives only 5 miles away from where we live in Northern, Virginia. She stopped by our condo quite often and we would all chat and even if it was a wave hello, I saw her frequently. Additionally, we always spent the Jewish holidays together, many times having dinner at her home. And, when Sheri’s parents were alive and would come down to visit, we would have dinner at our condo or Debra and her husband David’s house. She also attended many of the Memorial Day gatherings at my parent’s home in Falls Church, Virginia, for the parade.

Sheri told me everything about Debra’s battle as she went through it. The first 9 months were very good because she was on a medication that was working. After that, she went on another medication that gave her significant fatigue, so I did not see her as much. And near the end, she only wanted minimal visits, so Sheri would go over by herself with a ride for a quick visit and then come home.

I was at the funeral, and one of the best things for me is that the family got a service called CART (Communication Access Real-Time Translation). This is a speech to text interpreting service that I need because my hearing is so bad. The captioner was remote and I could read everything that anyone was saying on my phone. It was very meaningful to me and gave me full access to hearing the words of the rabbi and those who gave eulogies. It made me feel that I was a full part of the f 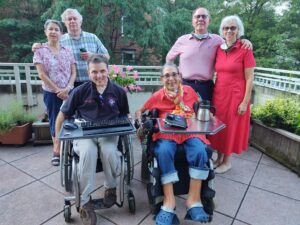 amily and included in the service.

After the funeral, I accompanied Sheri to the 2 Shiva callings. Sheri visited with guests and relatives, and although I didn’t know who everyone was, I made sure that I was there for her.

About 2 weeks after the funeral, Debra’s loss hit Sheri hard. She and her sister were extremely close. I consider them to be more than sisters, more like best friends. Sheri was sad, quiet, and obviously in mourning. I knew this was far from her normal self. She is usually talkative, outgoing, and ready to take on any challenge, but she was not like that anymore. I’d say for over a month she was very quiet, cried frequently, and was not herself.

I realized that she was experiencing grief, but I also knew that it was impossible, even as her husband, to understand what she was going through. I have siblings, but I have never lost one. And we are all very close like Sheri was to her sister, but I still couldn’t imagine what it felt like. Sheri did talk to me and explain how sad she was and how much she missed her sister. She would sob uncontrollably and tell me that she worried the feeling of grief would never go away. 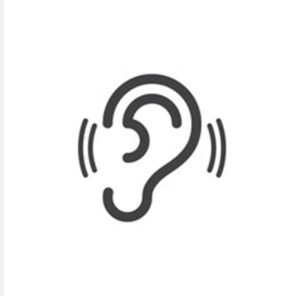 Sheri is much better now. That doesn’t mean she has forgotten about her sister. She talks about her openly and we both talk about what we miss. But that is now. It is very different than it was 2 months ago.

Every loss is different. But if I have any advice to give to someone who is supporting a grieved loved one is simple; just listen.

No, this blog is not about shoes. Instead, it is about a rather heavy topic. Grief. And the title of the blog is exactly what it means. Grief is not the same for everyone. Many people have losses 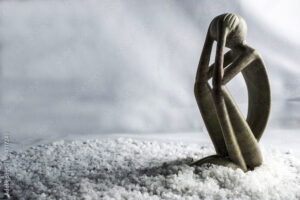 throughout their lives, but just because you have lost of a loved one, it doesn’t mean that another person who experiences a loss is going to have the same experience.

I recently lost my sister to liver cancer. She was my best friend, cheerleader, advisor, and in many cases because of our age difference, a mother figure. She got cancer out of the blue and while we knew there was a certainty that she wouldn’t survive, she lived for two years. During that time, I knew that she would not be with me forever, but it didn’t hit until she was gone. Actually, two weeks after she died. And it was like being run over by a bulldozer. I’ve never experienced anything like it. I consider myself resilient and able to get knocked down and in time get back up. This was total, 100%, knocked out. Anxiety took over. I didn’t want to get out of bed. When I did get out of bed, I sat in one place and could not focus on anything. I sobbed for hours. My phone was like a toxin. Just seeing it made me cringe. I didn’t want to be around people or talk. In fact, I didn’t know what I wanted but nothing was the best answer.

You can’t just “get over it.” Grief, as I’ve learned through reading very good books and meeting with a grief counselor, is something that you learn to live with by your side every day, but your companion changes over time. This realization was an “aha” moment for me. It helped me understand why I got so angry at people telling me that time will heal, and this wretched period of mourning would be behind me. While partly true, at the time it was not what I wanted to hear. And quite 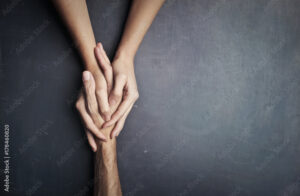 frankly, anyone who says that shouldn’t. I responded much better to those who said, “How can I help?” And while I knew I needed help but didn’t know what, they would come up with ideas and we would engage in a needed project. It distracted me and got me moving on things that needed my attention. That was right for me. It might not be the right thing for someone else.

At this point I’m doing better, but I know there will be times when the awful feeling of grief will overtake me. I’m better equipped to deal with it, but if I need to escape the world for

a little while, I won’t feel bad about it. I lost my sister. It’s okay if am not okay with it.