When we think that we have experienced every possible accessibility drama in a hotel room, another one arises. It is seriously like a game of whack a mole. We recently traveled to New York City and stayed at the Hampton Inn. We choose this hotel because it is known for having wheelchair accessible rooms with roll in showers and when you arrive there actually is a roll in shower (unlike some places that consider a roll in shower to be a shower with a lip). 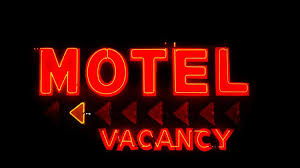 We arrived at our destination, much luggage moved up to our accessible room, and entered. The bathroom had a roll in shower and could have been a little bit bigger, but it would suffice. The area next to the bed on the right-hand side had ample room for moving and positioning to enter the bed. But here was the major issue. The bottom of the bed was so close to the wall that a wheelchair could not fit through to the other side. That meant that there was no way that I was going to be able to get around the bed and get in to sleep or reach the blinds to close them.

Luckily my attendant was able to make it work, and our only option, besides changing hotels which we did not want to do because of proximity to Madison Square Garden where we were attending a basketball tournament, was to sleep sideways on the bed. It was a king-size bed and we would not fall off. Tony’s feet hung off the bed, and it was quite difficult to get onto the bed, but we managed. 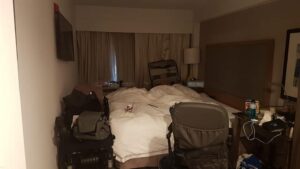 Of course, I have become adept at not letting these things slide. I met with the manager and explained the problem. The bed could not be moved because the headboard was attached to the wall so sliding it to the right was not going to solve the problem. Even if we could move the bed to the right, it would not change the fact that there was not enough space at the bottom of the bed to get through.

The manager asked if we wanted to relocate to a more accessible room in a Hampton Inn in Soho, but that would involve packing up our belongings and relying on public transportation to get back and forth to our destinations throughout the week. A definite no.

She then offered us a wheelchair accessible room at the Stewart Hotel. The location was great, but I had much trepidation about this location because I had called them to make a reservation and the reservation agent responded that they did not have a room with a roll in shower. I asked the manager of our hotel to give me a point of contact and said that I would go over to the hotel to check out the room. By the time she responded the room had already been taken!

We survived the week in the room, but I certainly didn’t leave without compensation. We got our room for free and our parking fee was waived. Yes, we saved money, but that doesn’t make it worth the effort, frustration, and 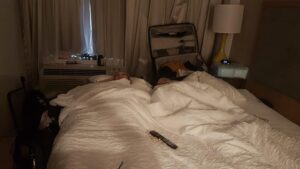 exhaustion of dealing with inaccessibility issues whenever we travel. I can’t understand why Hampton Inn cannot have one model of what is accessible and replicate it at every location. It seems to be a no-brainer. They should know what the rules are after 30 years of the Americans with Disabilities Act. But it is evident that advocacy and travel go hand-in-hand and we will continue to fight. The alternative is not traveling, and we are not ready or willing to give up.

It Shouldn’t Have to Be This Hard 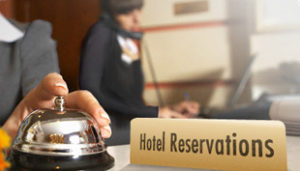 I wish I didn’t have to expect it. I try to be an optimist and hope that when I enter the door I won’t have to engage in a battle. But 9 out of 10 times this happens when we arrive at a hotel. This past weekend in Richmond the same old scenario occurred. We had to battle and negotiate over our incorrect room reservation.

I thought I had tried every means possible to ensure that our reservation is accurate when we arrive at our destination. When I call and make the reservation I explain to the agent in as many different ways as possible that we need a wheelchair accessible room with a roll in shower and a room adjacent/or very close for my attendant so I can call for help with my call bell. I request that a notation be put in the comments section of the reservation. I get the name of the individual who takes the reservation. And, if I’ve had success at a particular hotel, I ask for the exact same rooms by number. But for some reason, this still does not work. Each time I add additional “must” information to my list. But why should it have to be so hard to get a correct reservation? It is not like I am asking for a free room. I am paying the rate that everyone else pays. And when we arrive, just like other customers, we may be tired or need to quickly freshen up and get to another commitment. We usually don’t have time or energy to spend moving from room to room and/or negotiating with the individual at the desk about the problems with the reservation. 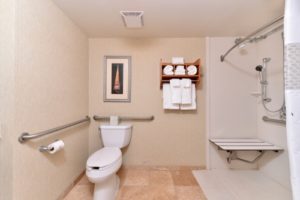 This time, our wheelchair accessible room was not listed. Luckily there was another wheelchair accessible room available. First breath of relief. The second issue was the “adjacent” room was far from adjacent. We were in room 401 and the “adjacent” room was 414, located as far away as you could get on the same floor, at the opposite end of the hallway. I was told that no other rooms next to 401 were available. I was informed by the manager on site that to get the adjacent room, even though it was written in the comments, I would need to call the day before and the day of arrival to ensure that the person doing the allotment of rooms made the appropriate designation. Really? In my frustration, I requested extra hotel points, complementary parking, and compensation for the room that was all the way down the hall. It was so far that my call bell did not work when I needed my attendant during the night. Thankfully, it was not a life-threatening need, but it could be next time.

I was given the points and complementary parking, but was told that the manager on duty could not take the second room off the bill and that to do that I would have to contact the district manager. I plan to do so. So now what? Even though I told them I had another reservation for December and I would change it if I was not appropriately compensated, it didn’t seem to make a difference. I felt like they wanted me to go somewhere else so they didn’t have to deal with the problem. The frustration is so over the top that it really makes you think twice about traveling because of the effort and discomfort. But Tony and I have decided that we will not let them beat us! 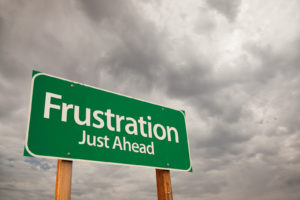 My new approach, revised again after this experience, is to make a reservation and have them put everything in the comments. Get the name of the individual who takes the reservation. Call one week before to ensure the reservation is accurate. Call again the day before to make sure the second room is adjacent. And call again the day we check in to double check everything. Will it work? We shall see. In the meantime, I will start my efforts getting compensation for room 414.

And so it goes. I will keep you updated in future blogs.