In Case You Hadn’t Heard

There was an eclipse recently. It was quite the event and even to the un-astronomically inclined, it lived up to its hype. It made me think though about other events that get a lot of hype and don’t always turn out so spectacular or fulfilling. Even when what you expect does not live up entirely to your expectations, there is usually at 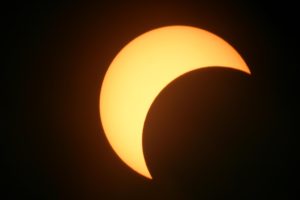 least some small sliver of light that you can focus on and nurture so it grows into something that, at least, resembles the hype. Is that an easy thing to do? Heck, no, but will we be happier if we do it? Heck, yes!

Last May, I was diagnosed with a condition called toxic-mega colon. At the time, I was told that there is no surgery to “fix” it, and the condition is life-threatening. We had to cancel a planned trip of a lifetime (yes, much-hyped!) with family and friends to the Grand Canyon. In the interim, I found ways, working with my doctor, to help with this condition so I could live as comfortably as possible.

After this diagnosis, and canceling the trip, many days felt bleak and at times I found it difficult to be happy. Then, without expecting it, an opportunity to do something amazing arrived in our mailbox. We received an invitation to a good friend’s wedding out on the West Coast in late March of 2017 and the wedding was the weekend before the Final Four in Phoenix to which we had scored tickets about a month before. My friend’s wedding was a once-in-a-lifetime occasion and the timing was perfect. I would have the chance to visit some of my many friends out in California, and the Final Four was Bucket List material

! It had been so long since I had been to California and I had never flown with my powerchair, so there was cause to be nervous. However, I was determined to do it!

For both my husband and I, this trip provided us with something positive to focus on instead what felt like everything in life revolving around my condition. Planning the trip took an extensive amount of time; three different hotels (all of which required multiple phone conversations to confirm wheelchair access and roll-in showers), and transportation had to be arranged. Thanks to the help of the great friends we attended the Final Four with, we scored a fantastic Airbnb in Tempe with a roll-in shower. And it was great! While my flying experience could’ve been better (I have already written about that), the trip w 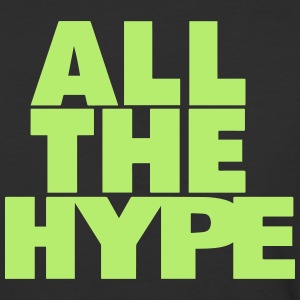 as certainly worth the effort and every bit exceeded expectations. It lived up to all of the hype!

What I have learned is that when presented with an opportunity to do something that is a once-in-a-lifetime experience, and you can make it happen, do it. Focusing on a positive distracts you from the negative because it keeps you busy and happy. And if you are lucky, it will live up to all the hype.

Happy 27th Anniversary to The Americans With Disabilities Act 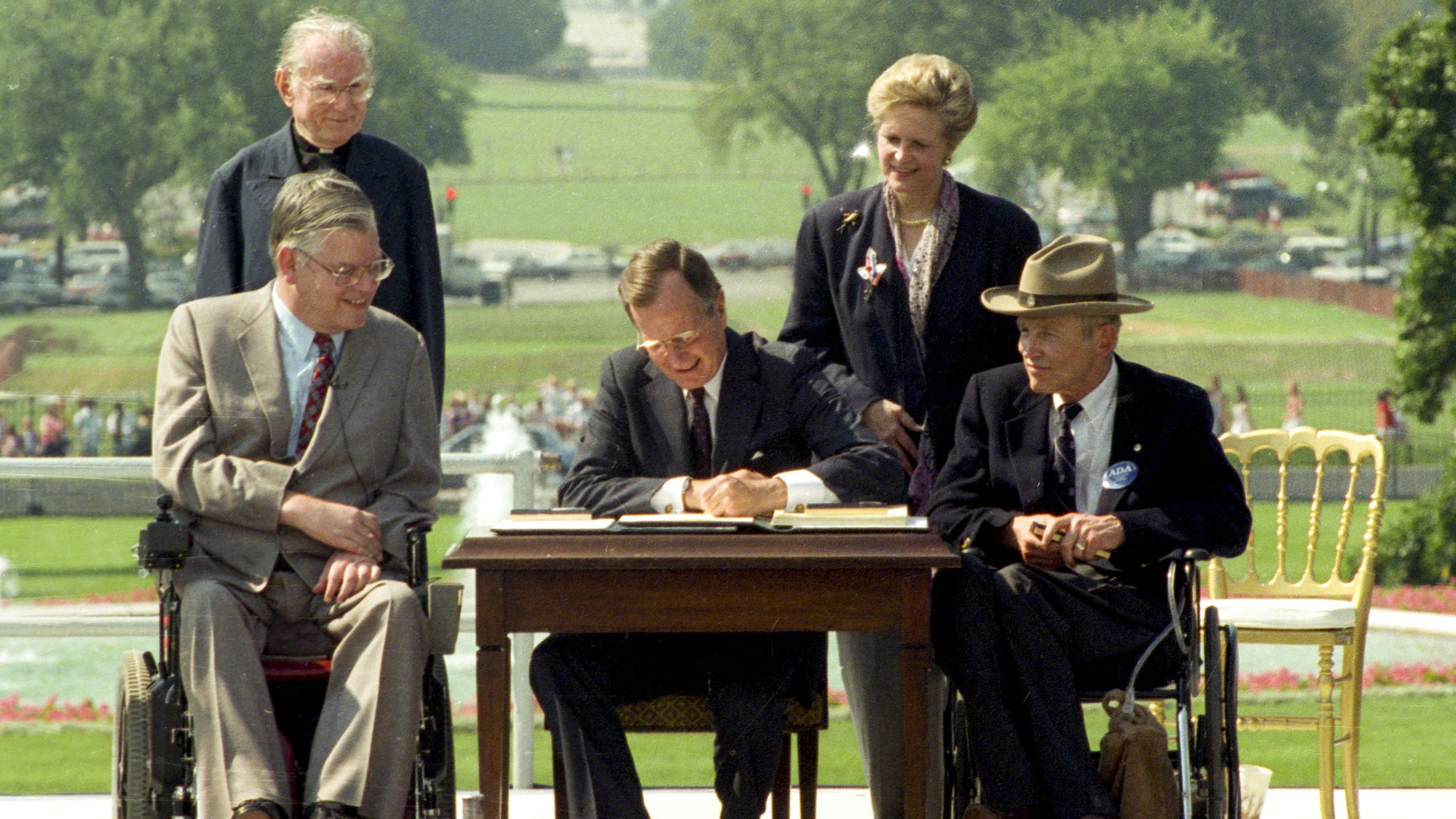 Today we mark an important day in history: the signing of the Americans with Disabilities Act (ADA). The ADA recognizes that individuals with disabilities have an equal right to participate in society. It provides freedom from discrimination in employment and the right to access places of public accommodation such as restaurants and movie theaters. A special day indeed.

Much has improved in 27 years. Steps have been eliminated. Ramps have been built. Crosswalks with technology that helps the blind are common. Glasses for captioning in movie theaters exist. Sports arenas have sufficient seating and other accommodations for the disabled. Developers are implementing universal design when building new apartments and office buildings. In short, the ability for people with disabilities to participate fully in society, both at work and at play has greatly increased.

At the same time, we are witnessing increased challenges to maintaining basic civil rights like health care and affordable housing. This is not intended to be political, but a call to action. While every disability is different, collectively we share the responsibility to fight for the rights for all. Our predecessors fought with their bodies and souls just to get an education, something that we take for granted today.

Let us celebrate achievements. But at the same time let us recommit to advocating for all. The ADA is a self-enforcing statute. Without vigorous advocacy and outreach, this important legislation will sit on the shelf. And without our voices and actions, other basic civil rights will continue to erode. We must be heard. We must work together. And we must ensure that our country is a place for all, including people with disabilities.

My Recent Experience Flying with my Power Chair

I had not flown since before 9/11 and I had never flown with my power chair, so I didn’t know what to expect. But I was about to begin a bucket list trip to California and Ari 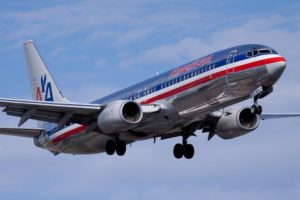 zona that included a good friend’s wedding, visits with other friends and the NCAA Final Four. I was excited but also nervous as soon as I had booked my flight from DCA to LAX on American Airlines.

I read everything I could find with tips and advice for flying with a power chair. I relied on friends who had experience to give me advice on what I needed to do ahead of time and what to do when boarding the plane. I spoke to the American Airlines Special Assistance agent and had everything ready to wrap and protect my joystick. And I took a direct flight to limit the number of times that my wheelchair would need to be moved. I was ready on March 23, 2017 to start my adventure.

The results were a mixed bag. My chair did sustain damage, but it was not inoperable. The majority of staff from American Airlines were very helpful and well trained. Transfers to the aisle chair and into the seat were smooth and the aisle chair was in good condition on the trip out and on the trip back. 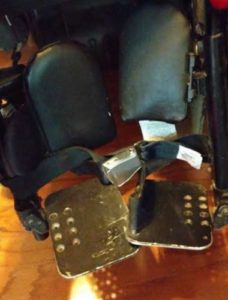 When I arrived in California my left leg rest would not connect to my wheelchair because a big piece that holds it on had broken off in transit. At that point it was late at night and all I wanted to do was pick up the wheelchair rental van so I could go to the hotel and go to bed! So we quickly figured out a makeshift solution and with the assistance of a stewardess, used a seat belt extender to wrap my foot rests together. I used that for the rest of the trip.

At the end of the trip, when we arrived back in Virginia, my joystick, despite being completely wrapped and protected, was disconnected and hanging. We used packaging tape to temporarily hold the joystick in place so I could drive. After I got home I added duct tape and a bungee cord to further secure the joystick.

However, the worst part of my flying experience did not involve broken parts on my wheelchair. It involves humiliation and treatment that was completely uncalled for.

I boarded the plane in Phoenix prior to everyone else and was comfortable on my cushion in my seat. Other passengers started boarding the plane and the next thing I knew a gentleman from American Airlines came over to me and said that there had been complaints “of an odor” and that he wanted to put a plastic bag around my cushion. I told him that I did not understand what he was saying because there was no odor and that it was not safe for my skin to be sitting on a plastic bag for a long flight. He asked if I would just “work with him,” and I responded that I felt humiliated. He left and came back again and asked once more if I would just “work with him so the plane could take off.” Again, I told him that I didn’t understand what the problem was that I didn’t see anybody complaining. I asked him straight out if he smelled anything and he answered, “No, but please just work with me so we can get the plane off the ground.” 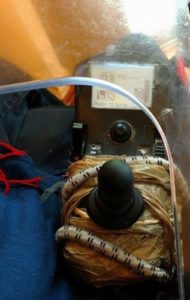 was just being humiliated but I would try to do something so that the plane could take off. There was a final compromise that my cushion would be wrapped with two blankets (I have no idea what that accomplished). Then, in front of everyone on the plane, they brought the aisle chair back, lifted me onto it, wrapped my cushion with two blankets and put me back on the cushion in the seat.

One of the individuals operating the aisle chair whispered in my ear that he thought what was going on was completely uncalled for and took my name and said that he was going to report it to his supervisor. I have no idea if he did or he didn’t, but soon afterwards the plane took off, 25 minutes late.

I contacted the disability hotline at American Airlines and I received a call the next day from a representative in their executive office. I relayed this entire story and received profuse apologies. I was told that they would provide me with a credit voucher, but I have not received anything yet. They did promptly resolve my baggage/wheelchair issues and have already ordered the parts. At least three individuals called me within a period of a couple of hours so they deserve credit for that.

I won’t stop flying, and I will likely use American Airlines again. I don’t have enough information to blame a specific person for the humiliating incident, but still wonder what the problem was. Did they not want to deal with me? I didn’t smell so I have no idea why they were so adamant about wrapping my cushion. I am hopeful that American Airlines will investigate the incident and figure out the root cause of the problem.

I have recovered from the humiliation and the jet lag, but I am still waiting for the replacement parts for my wheelchair to arrive. In the meantime, I’m hoping that my chair continues to work.